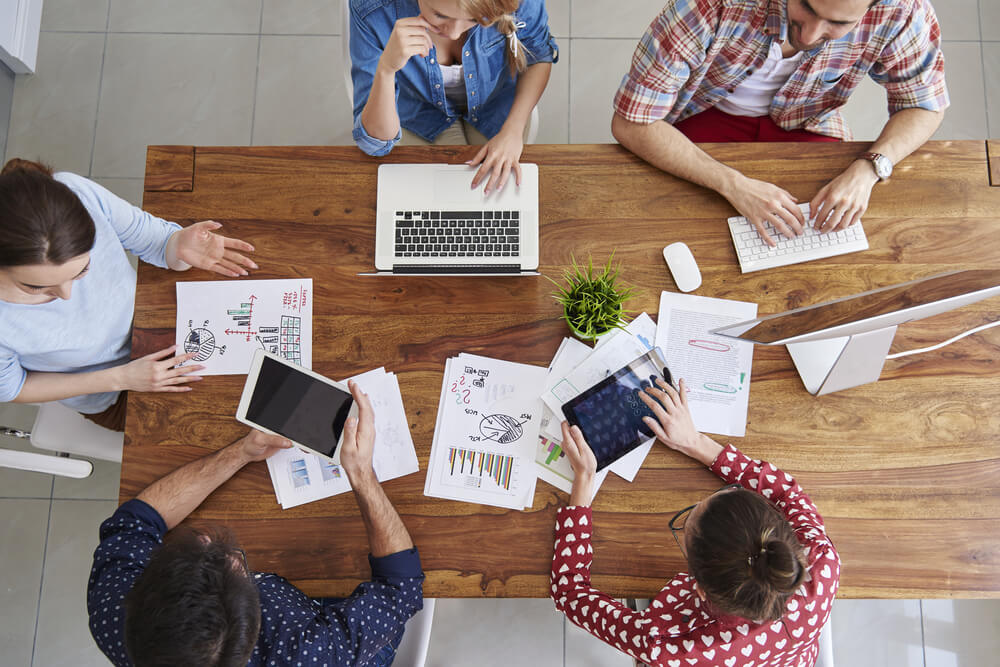 Whether you call them co-working environments, collaborative spaces or shared office spaces, the commercial office sector is no longer just about corner offices and cubicle farms. Young professionals are driving a co-working trend in Phoenix, just as they are around the country and even around the world.

Forbes declared collaborative spaces as one of their “10 Workplace Trends You’ll See In 2016,” while Deloitte’s “Financial Services Industry Outlooks” series named the collaborative economy one of four significant disruptions in commercial real estate. The foundation of the co-working trend is the flexibility of mobile electronics, allowing startups, small companies and entrepreneurs to set up shop just about anywhere. In addition, CoreNet Global, a commercial real estate association, notes that the average amount of space per office worker declined from about 400 square feet in 1985 to 176 square feet in 2012.

The trend is also fostered by the preferences of the millennial generation, which seeks open, social work environments rather than separating into cubes and offices. Not only do younger workers enjoy fostering synergies between businesses (even those in different industries), they no longer view where you sit as where you rank in an organization.

Investing in the Co-working Trend

Obviously, this trend is something you need to take into consideration as an investor or property owner in the Phoenix office real estate sector. Dynamically configurable spaces are one solution; for example, office furniture companies such as Steelcase offer modular wall systems that can be reconfigured with minimum effort or disruption. While load-bearing walls need to be taken into consideration, the fact is that most existing office spaces can be opened up to create collaborative environments–an approach that’s being incorporated in many midtown, midcentury offices in Phoenix.

Don’t want to convert your entire office building to co-working use? Consider dedicating just a portion while leaving the rest as traditional space. Don’t feel like managing a collaborative space? There are a growing variety of operators who specialize in handling such environments.

It’s still early in the co-working trend, but the millennial generation is going to be an increasing portion of the workforce for decades. As an investor, consider that small businesses that succeed could grow to need a larger office space in the future.

The evolution of space use is encouraging subleasing rather than leasing in many cases. The current co-working spaces in Phoenix often have non-traditional pricing models–think membership fees or daily rates instead of rental or lease agreements. As an investor, of course, this needs careful consideration, since it’s not the same assured income stream you may have used in your financials. Just being hip doesn’t pay the bills!

Some of the established co-working spaces in the Greater Phoenix metro area include:

At a base level, these locations generally provide broadband Wi-Fi, private conference rooms, and business services such as printing or notary services. The differences can be found in the level of concierge services, social activities, and even benefits like cafes and bars–all of which are reflected in the pricing.

Office real estate is constantly changing, and is a reflection of how people work and use space. The millennial generation is changing that, every bit a much as we saw the arrival of executive suite operations (with shared reception desks, separate offices and conference rooms) at the turn of the century. As this newest step in evolution plays out, commercial real estate owners will need to determine which configurations and perks are most in demand to attract new businesses and tenants.